Set in the sleepy Mexican village of Salsipuedes in Baja California Norte, Coco tells the story of a young chihuahua that is abducted by a Mexican cartel. Alonzo, the canine protagonist, is shot with a tranquilizer dart at the beginning of the movie. He wakes up in a dingy and severe room hidden under a rundown bar, handcuffed to a wooden bedpost which he immediately attempts to sever with his sharp little teeth.

The chihuahua chews in vain for days, irking his captors, who tell him to cállate (shut up). “No me fucking importa,” replies the chihuahua, who remains totally fucking cholo despite his present situation. In response to Alonzo’s impudence, one of the captors, Jesús, injects a mysterious psychoactive substance into Alonzo, effectively immobilizing the dog.

Utterly repelled by the untempered homophobia, Alonzo struggles to escape, viciously tearing away like a rabid dog at the ropes that bind him. Much to everyone’s surprise, the chihuahua breaks free. “I kill all you gonorrheas!” he snarls in broken English. He lunges for the face of a shocked spectator. Alonzo begins attacking everyone, chewing their startled visages off one by one. Although thirteen people survived the rampage, only one ruthless rogue remains unscathed. It is Alonzo’s villainous captor, Jesús.

After murdering so many people, Alonzo becomes too exhausted to fight and thus flees. The feared and fearless Jesús, who now has the upper hand, assembles a group of faceless bandits bent on revenge to search for the elusive chihuahua. 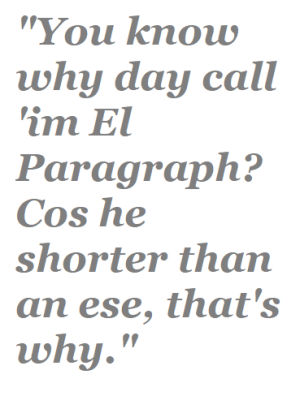 Felón, 62, is a retired gangbanger and former methamphetamine manufacturer from Juarez. Flaco, 73, is a rabid left-wing extremist. Dopey, 52, will kill for his next high. Chema, 69, is the grandfather of Jesús. Last but not least, there is El Paragraph, the murderous midget from Medellin. “Don’t fuck with the Paragraph,” says Jesús. “You know why day call ‘im El Paragraph? Cos he shorter than an ese, that’s why.”

After a long search fueled by cocaine, Jesús and his group of colorful individuals are about to give up when, lo and behold, they encounter Alonzo at the bar where he was first held captive. Far from helpless, this time, the dog is accompanied by loose women who are feeding him tequila and pastries.  In a matter of seconds, the situation has gone from the tame and quotidian to the unfamiliar and hazardous. In other words, shit got real.

“Fuck you, putos!” declares Alonzo. In a display of pure prestidigitation, the dog yanks out an automatic rifle disguised in the form of a guitar case. He opens fire, destroying everyone and everything in his path. Thousands of rounds later, everyone in the bar is dead. I mean, fucking everyone. The gangstas, the children, the women, the bartender, the bartender’s fucking cat. Not one person is alive. Except Jesús. And Alonzo.

Alonzo walks calmly to his archenemy, Jesús, who is bleeding profusely, half-dead. “No mames,” he says, staring at Alonzo. “Es over, holmes,” Alonzo replies. Without another word, the dog chews his face off. He gets up, his tongue still hanging out and dripping with human blood, and walks off into the sunset while strumming a mariachi guitar like a truly heroic psychopath. The End.